Why Do I Need a Carbon Monoxide Detector?

What if I told you carbon monoxide detectors are a scam? Well I'd be lying. Carbon monoxide is a poisonous gas that gets into your red blood cells and messes everything up; knowing when it's in your house is worth the investment. It doesn't help that it's colorless and odorless either. We had some furnace troubles last winter and after a night of not being sure if we'd die quietly in our sleep, I decided to buy a CO detector ($20 at my local hardware store). In order to understand why carbon monoxide is so deadly, we first need to learn a little about how the body transports oxygen.

It starts with red blood cells. These are special cells that are really rich in a molecule called hemoglobin. It's a big curled up protein with an iron atom in just the right place. This iron atom wants electrons and holds on to the extra ones that are in a molecule of oxygen. The rest of the protein makes sure there's a space that's just big enough to fit an oxygen molecule (more on this later). Each molecule of hemoglobin has four of these iron centers. When the red blood cells are in a place with lots of oxygen, like your lungs, these four sites fill up quickly. When the cells are in an area with low oxygen, like your muscles during a workout, then hemoglobin rearranges and lets go of the oxygen so your muscle can use it to turn carbs into energy. 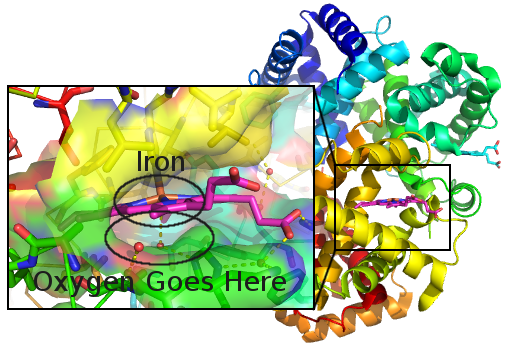 An iron atom can bind an oxygen molecule while the rest of the protein makes a nice pocket that keeps other things out of the way.

So what about carbon monoxide? Well it's a similar shape and size to an oxygen molecule. They have some other properties in common too, like sticking to that iron atom. The problem is that carbon monoxide binds to the iron way better than oxygen does. So much so that no matter how much rearrangement it does in your muscles, hemoglobin can't shake any CO molecules that are attached. It gets worse, actually. Once a carbon monoxide is stuck to one of the four oxygen-binding sites, it gums up the other three so they don't work properly either.

Humans (and other animals) have evolved some defenses against this problem, namely in the structure of hemoglobin itself. Remember how I said that the protein has an oxygen-shaped pocket next to the iron? One way in which oxygen and CO are different is in how they stick to the iron atom; carbon monoxide sticks out straight and oxygen at an angle. There's a pentagon-shaped part right next to where the oxygen sits. It doesn't really bother the bent oxygen much but it gets in the way of the straight carbon monoxide. This means that the oxygen can fit into that space a lot better than cabon monoxide can. Carbon monoxide still binds to hemoglobin about 250 times better than oxygen does, but it gives your body the ability to tolerate a low level of the poisonous gas.

Levels of naturally occuring carbon monoxide are rarely high enough to overwhelm this defense. However, incomplete burning of fossil-fuels like the natural gas in our furnace, creates artificially high levels in the immediate area and there hasn't been nearly enough time for our species to evolve any sort of response. The symptoms of cabon monoxide poisoning are pretty general (headache, nausea, etc). If you have a CO detector, on the other hand, you can do something about it. Get yourself and loved ones to some fresh air. In regular air it takes about 2-6 hours for half of the carbon monoxide to be replaced with good old oxygen. If you're given pure oxygen at 3 atmospheres, this time goes down to tens of minutes. And if you don't have a CO detector, go get one right now.

This article prompted me to write a follow-up piece: "I Have a Carbon Monoxide Detector. Now What?".