Follow-up: I Have a Carbon Monoxide Detector. Now What? 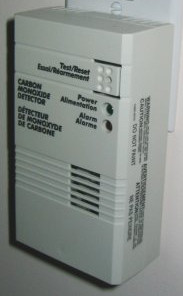 CO Levels in Air and Blood

When I was younger, I was terrified that carbon monoxide binds permanently to hemoglobin and that the damage might never be undone. Real life is a lot more complicated than that. Small amounts of carbon monoxide are produced routinely in your body and may serve a function as a neurotransmitter. But at higher levels, it becomes very toxic. In 1965, a paper was published ("Coburn-Forster-Kane") that provided an equation for estimating levels of hemoglobin bound up with carbon monoxide ("COHb"), based on a variety of factors. In case you're curious, the equation is:

It's not terribly important that you understand the whole equation so I'll point out the the interesting parts. We're trying to solve for \([HbCO]_t\), the concentration of carboxyhemoglobin in the blood at any given time. First there's the presence of a term \(t\), which means the duration of exposure to CO, measured in minutes. This means that, in some way, the amount of time you spend exposed to higher levels of carbon monoxide is important. Then there's \(PI_{CO}\), which represents the concentration of carbon monoxide in the air you're breathing. Lastly there's \(B\), which tracks how much air enters your lungs every minute. So the effect depends on how fast you're breathing. Basically, exercise and other vigorous activites make the whole process run faster. The rest of the equation takes care of things like total volume of blood and how much carbon monoxide is naturally present in the body.

Some smart people who are good at math have made graphs that show how this equation works. The one on the right has been shamelessly borrowed from CO Headquarters. It shows the per cent of hemoglobin that's in the carbon monoxide form as a function of time. Each curve is a different level of CO exposure in the surrounding air. The World Health Organization has published some information that is helpful here. Levels of COHb below 5% have no noticeable impact unless you are a member of an at-risk population (heart-disease, etc). Severe symptoms occur between 30-50% and bad things like coma, convulsions and death occur at levels above 50%. So let's say you're pregnant and are concerned about hitting the 15% COHb threshold at which the WHO reports developmental problems. This means that if you're exposed to 200ppm carbon monoxide in the air, you have about 300 minutes (5 hours) before the level of COHb hits 15%. At 500ppm this drops to 100 minutes (1 hour 40 minutes) and 1000 ppm to 30 minutes. Of course if any number of variables change (breathing rate, etc), so do these numbers. Also, if you get into fresh air, the concentration returns to normal levels over a similar time frame.

How to Detect Carbon Monoxide

So how does any of this impact carbon monoxide detectors? A CO level of 35 ppm can be problematic but only for extended periods of time. The need to avoid false alarms is important, especially in places like hospitals where evacuation has its own problems. Cigarette smoke produces lots of carbon monoxide but you wouldn't want your alarm going off every time you light one. Alarms typically have a threshold that's a combination of CO concentration and exposure time (eg "150 ppm, 10-50 minutes"). There are several ways to achieve this but here's my favorite: the biomimetic sensor. It uses a disc of gel that absorbs carbon monoxide over time. The composition of the gel is designed in such a way that it responds to carbon monoxide in a similar way to hemoglobin, hence the term "biomimetic". It's made of an atom of metal (to simulate the iron in hemoglobin) bound to a large organic molecule. Part of the molecule holds the metal and another part, the "chromophore", changes color depending on whether the metal is bound to carbon monoxide. The color of the sensor then follows the curves in the graph above. By putting a light source on one side and a detector on the other, the darkness can be measured and the alarm triggered once it hits a certain level. This type of alarm is the most reliable but also expensive so most consumer products use other methods.