A Computer for Chemistry Data Analysis

I've been tasked with finding a new computer for my PhD research here at UIC. I'll be collecting multiple data frames and then processing and combining them into one image; I think it's worth the time to get this right. If you have anything to share on the issue, feel free to leave a comment. I wasn't given many restrictions other than that it must have a monitor, keyboard and mouse (for ergonomic reasons) and that “$1000 is on the high end but reasonable”. I've spent the past few days researching current technologies and have come up with some suggestions. All of the products listed will probably by obsolete by the time I'm done writing this, but hopefully the background will still be valid for a while. If you want to see specifically which parts I'm considering, jump straight to the parts list. 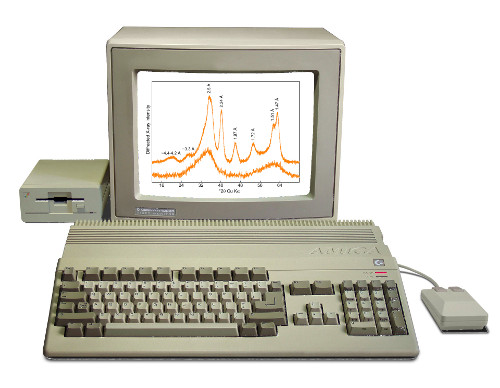 The first step in finding the right computer is deciding what this computer actually needs to do. My research centers around mapping the 2D and 3D changes that occur in a battery electrode. I will use an X-ray microdiffractometer to measure the structure on a spot approximately 100µm across. This will be repeated several times in various places. Each location will result in roughly 1 MB of data. The first step will be to integrate each two-dimensional data-set into a one-dimensional spectrum, so I need my computer to be good at mathematical calculations. Since I'll be processing multiple independent spectra, I also want it to be amenable to parallel computing. I would like to leave the option open of using something like PyCUDA if I come across a nice graphics card. UIC does have a super-computer that I can use at times, so if I need more than my computer can provide I have that option.

Right now I'm looking at the Haswell CPU architecture, which gives me the choice of a Core i3, i5 or i7. The i7 line has hyper-threading, which is the ability to run multiple threads on each core and make good use of processor downtime; seems like something that would help me. The big difference between the different i7's is their choice of memory, DDR3 vs DDR4. This affects the choice of motherboard, and obviously memory. The Haswell-E processors (5960K, 5930K, 5820K) have either six or eight cores versus four cores in the 4790K. Remember, all the i7's have hyper-threading so they can run 12, 16 and 8 threads respectively. The 4790 and 4790K differ mostly in the sense that the 4790K can be overclocked. For an extra $30, I think I will give myself this option.

The motherboards for these processors come in two flavors. One has the LGA 2011-v3 socket, which fits the newer Haswell-E line, and uses DDR4 memory; the other uses the 1150 socket with DDR3 and processors of the regular Haswell type. The former has more cores but the parts (CPU, motherboard and memory) are more expensive. I've decided on the regular Haswell setup. A graphics card is designed to do small repetitive tasks very quickly and can be used for fast data processing. A motherboard with a PCI-Ex16 slot will make that possible in the future. Boards with the Intel Z97 chip-set support overclocking (compared the the H97 chip-set). I'm not sure if I'll use this but why not get it anyway, right?

So motherboard selection will be determined in part by whether I get DDR3 or DDR4. DDR4 is the new successor to DDR3. There are not as many options available yet and it's more expensive. It's a little bit faster and uses significantly less power. I checked out the performance tests in the video below and it looks like the speed benefits only become significant with six or more cores. This fits well with the processor section since the one that uses DDR3 has four cores and the DDR4-class processors have six. I'm leaning towards the 4-core DDR3 setup as a better value.

I'm sold on using a solid-state drive (SSD) for holding system files. I love the fast boot time and snappy application loading. An SSD connected by PCI-express would be great, although I think I'll go for SATA III to save a few bucks. With the massive speed gains of SSDs compared to convention hard-drives, the interface itself is now the bottle-neck. A PCI-Express SSD would make my system a little more responsive but right now they cost several hundred dollars. To complement the SSD, I have a 1 TB conventional hard disk drive (HDD) that I will put in for data storage. Hopefully transferring data from the HDD to memory will not be too slow. If it is I may have to transfer the active project from the slow HDD to the fast SSD before performing that analysis.

The real question here is whether I need to run anything that absolutely won't run on GNU/Linux. Those of you that know me know that I'm a big Linux fan-boy and really don't like Windows. The first thing that I'll be doing is installing Arch Linux. My plan right now is to use Python to analyze most of these data, which is platform agnostic. Some of the diffraction analysis software that is specific to our instrument will only run on Windows. Hopefully, the Windows emulator written for Linux (WINE), will be able to handle this task. If not, I might have to buy a copy of Windows in the future *shudder*.

Every system needs enough power to run all the hardware inside of it. The major consideration here is the maximum power that the PSU can deliver. This number has to be greater than the power required by all the components or things will get weird. I've dealt with power supply issues in the past and they're a nightmare. There's never a light that comes on saying "hey, you're under-powered". Things will just sporadically stop working. The computer might freeze or randomly restart itself. Maybe the whole thing will just be sluggish and I won't know why. According to a handy chart I found on Newegg, I estimate I'll need 350-400 W of power. The advantage I have is that I won't be using a separate graphics card for now. The PSU I selected has a max power rating of 550W so that should give me enough breathing room. Beyond the maximum power consideration, there are some other considerations, like efficiency and noise. I will rely mostly on reviews for that information. I also like the idea of modular cables. This lets me connect only the ones I need and will reduce the clutter in the case.

Here are the parts I'm considering. I haven't included the monitor since this is just a peripheral that I can swap out at will.