As per my doctor's suggestion, I'm spending the next week on a sailboat. No, it's not a blood pressure or a stress thing. I had a physical exam a while ago and for the most part everything was normal. The one exception was vitamin D deficiency. The solution? Spend more time in the sun.

Vitamin D is actually a group of five vitamins: D1 through D5. The most relevant to human health are vitamins D2 and D3 and are usually what people mean when they refer to “vitamin D”. My results listed “Vitamin D, 25-hydroxy” as 18 \(\frac{ng}{mL}\) and the target range was 30-96 \(\frac{ng}{mL}\). An article in The American Journal of Clinical Nutrition suggests that levels below 20 \(\frac{ng}{mL}\) indicates a deficiency. Clearly I need to get those levels up. But why? 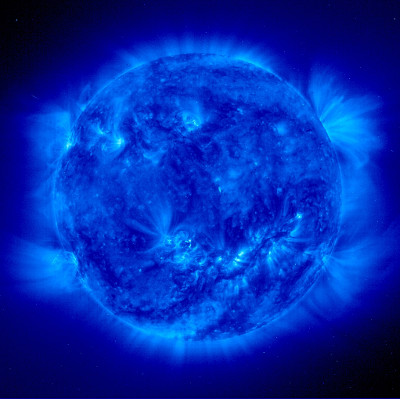 The sun at 17.1 nm light. Courtesy of SOHO/EIT consortium. SOHO is a project of international cooperation between ESA and NASA.

The Importance of Vitamin D3

Vitamin D3 has no significant activity on its own(a). It's just the starting material for a system that regulates the amount of calcium your body absorbs. The first step prepares the vitamin for use in regulation. Chemists often number the carbons in medium-sized organic molecules for easy reference. The one we're interested in here is carbon 25. Initially this carbon is bonded to three other carbons and a hydrogen atom. In the liver, the hydrogen atom is replaced with an oxygen and a hydrogen, a “hydroxy group”, to form 25-hydroxy D3. This process happens readily and this molecule is the dominant form of vitamin D3. This is why my lab work lists the concentration of vitamin D in this form.

The second step turns it into the active form. In your kidneys there is an enzyme that adds another hydroxy group, this time to the other end of the molecule at the 1 position, to form dihydroxy D3(b). Once it's in the dihydroxy form it can bind to and activate a protein in the nuclei and membranes of cells, called the vitamin D receptor. Each hydroxy group has a polarity that matches up with an amino acid in the vitamin D receptor. The common 25-hydroxy form is missing one of the hydroxy groups so can't fit nearly as well. In intestinal cells, activating the vitamin D receptor causes other proteins to transport calcium ions across the intestine to the blood. In bone-synthesizing cells (osteoblasts), it activates molecules that absorb calcium from the blood and build it on to the bone.

That second hydroxylation step is closely regulated by your body. As the level of the active dihydroxy D3 in your blood rises, the activity of the kidney enzyme goes down. High calcium levels similarly trigger low enzyme activity. There's also a hormone that causes more enzyme to be produced. In order for these regulatory steps to be effective, however, there needs to be enough 25-hydroxy D3 as starting material. Vitamin D deficiency results in bone pain and muscle weakness in addition to being linked to cardiovascular disease, cognitive impairment, childhood asthma and cancer. The childhood illness Rickets can also be caused by insufficient vitamin D and results in soft and malformed bones due to impaired calcium absorption. One way to increase vitamin D levels is to have more in your diet, for example from Vitamin D milk or oral supplements. The other way is to get more sun.

The reaction mechanism for making vitamin D3 (right) from 7-dehydrocholesterol (left). Ultraviolet light breaks one bond to form the intermediate (middle), which then rearranges to form the final product.

Vitamin D3 is produced in the skin when exposed to ultraviolet light, like that from the sun. 7-dehydrocholesterol is present throughout the body since it's a precursor to cholesterol, which is a part of animal cell membranes. The structures of 7-dehydrocholesterol and vitamin D3 are very similar; the former just has one extra ring. When UV light of the right wavelength (270 – 320 nm, UVB) hits that ring, it breaks one of the bonds. The resulting molecule then rotates around the remaining bonds to form the more stable conformation that matches vitamin D3. The first step takes place immediately, while the second one happens over several days.

So how much sunlight does it take? The recommended daily allowance of vitamin D taken orally is 600 international units (IUs), about 15 μg. The amount of sun needed to reach this level is influenced by a lot of factors: latitude, season, skin color, clothing, sunscreen, etc. Generally, though, it's a matter of minutes. One article estimated that “In Boston, MA, from April to October at 12 PM EST an individual with type III skin, with 25.5% of the body surface area exposed, would need to spend 3 to 8 minutes in the sun to synthesize 400 IU of vitamin D.” This is not a question of sunbathing to get vitamin D, but more a question of trying to spend a few minutes outside every day. Also, the sun's impact on your skin can be negative, such as sunburn and increased risk of skin cancer.

As with most fat-soluble vitamins, it is possible to overdose. Too much sun doesn't cause problems where vitamin D is concerned, though. Once your skin reaches a certain amount of that intermediate pre-vitamin, the product starts to break down into other, inactive molecules. Cases of vitamin D toxicity are almost always associated with people taking too many oral supplements.

What About the Other Vitamin D's?

Up until now, I've focused on vitamin D3. This is the one most common in vertebrates and the one we can synthesize using sunlight. The other varieties are very similar in structure, with a few double bonds or methyl groups added on here and there. They are metabolized by similar pathways to those for vitamin D3. Due to the slightly different shape, however, they may not have the same affinity for the vitamin D receptor. Vitamin D2 is the only other common form and is made by a variety of fungi. Research suggests it has about 25% of the efficacy of vitamin D3.